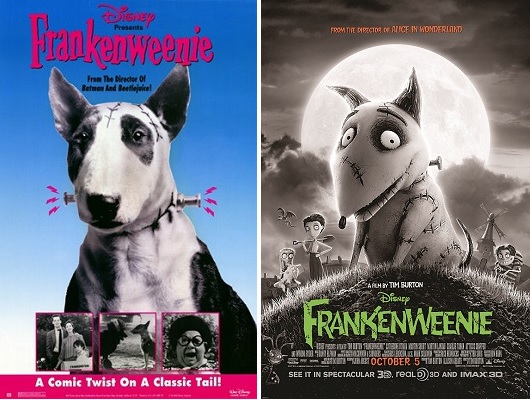 It’s the most spooktacular time of the year, when festive Disney fans celebrate their love for Hocus Pocus, The Nightmare Before Christmas, and Halloweentown. While these films each have their very own unique vibe and fan following, there is another Disney Halloween-themed film that gets considerably less attention, and oh, what a miss it is to skip out on this film.  Tim Burton’s Frankenweenie.

Frankenweenie is actually a tale of two films – each very different from the other, though both created by the creepy genius that is the mind of Tim Burton.

Burton created the first version of this film in 1984 as a live action short feature, clocking in at 29 minutes. The storyline of the film follows a boy named Victor who loses his dog Sparky in a car accident. Shortly after burying his best friend, Victor is inspired in his science class to try his hand using electricity to raise his friend from the dead. Victor is successful, and Sparky returns to the land of the living, though not quite the same as he was when he was first alive.

As you might imagine, Sparky’s rebirth and altered appearance are not accepted very warmly by nervous neighbors. A series of hectic events puts Victor in danger, and it is only when he is saved by Sparky – who dies again in this incident – that the neighbors realize it’s not the outside appearance that matters, but what’s inside that counts. Everyone works together to join Victor in once again raising Sparky from the dead, and he is celebrated as a hero.

Upon completion of the film, Burton was fired from Disney for “wasting” their resources on a film they deemed too scary for family viewing. The film did have a very limited release in the UK, and Disney eventually released it on VHS after Burton became famous, although only in a censored version.  It was eventually given an uncensored release in 1993 as a special feature on The Nightmare Before Christmas DVD.

After losing his position with Disney, Burton proceeded to create several playful, inventive, imaginative, and wildly successful films, including Pee Wee’s Big Adventure, Beetlejuice, two Batman films, and Edward Scissorhands (which I must admit I’ve never seen, as it strikes me as just a little too weird and frightening).  Riding the success of these films, Burton was able to work again with Disney, under their Touchstone label, to create his first animated masterpiece – The Nightmare Before Christmas (which is hands down my favorite Halloween/Christmas film). Burton made Nightmare using the very tedious process of stop-motion animation (often described as Claymation). The eventual success of Nightmare opened the door for Burton to further explore the medium of stop-motion animation, leading to Corpse Bride in 2005 and a reinvention of Frankenweenie in 2012.

The second time around, Burton was a bit more measured in his portrayal of Victor and his deceased dog Sparky. Disney, for their part, learned to trust Burton’s creativity and judgement. The animated nature of the film softened the gruesome details of the subject matter. The film is both an homage to – and a parody of – the classic gothic horror characters that most folks know. Frankenstein, Dracula, Werewolf, Mummy, Swamp Monster, bats and black cats – they are all lovingly represented in this 90-minute black-and-white homage to gothic science fiction filmography. While the film can be described as tongue-in-cheek, is it obvious that Burton has a great love for the genre he plays with for this film.  In fact, Burton is quoted as saying he wouldn’t have made the film if it couldn’t be done in black and white. The storyline is expanded beyond the very condensed story of the 1984 film, and allows for more character and plot development. The film stars Martin Short, Catherine O’Hara, Martin Landau, and Wynona Ryder – all of whom have worked with Burton on other film projects. Danny Elfman – also a regular collaborator with Burton – masterfully scores the film.

Frankenweenie mat not be for everyone, but for those who appreciate animation, imagination, gothic literature and films, Disney, and especially Tim Burton, this film is a real treat at this time of year.

In a climactic carnival scene at the end of the 2012 film, the Disney film Bambi is prominently displayed on a movie theater marquee. After doing a bit of research into this observation, I learned that Bambi was cited by Burton for two reasons. First – the date of Bambi’s film release provides a stamp of the movie’s time period. Also – and maybe more pointedly – Burton notes that Bambi represents a sense of death and loss – key story elements that are prevalent in many classic Disney films.

According to Burton in a 2012 interview with Reuters “In this ‘Frankenweenie’ film, I make a reference to ‘Bambi’ because Disney founded itself on exploring those things – Bambi’s mother dying, for example. Or ‘The Lion King’ – there’s death all over that movie. I find that people at the company forget the history of Walt Disney movies. ‘Old Yeller,’ ‘Snow White’ – the movies had scary elements. I felt ‘Frankenweenie’ was a pretty classic Disney movie.”

The sets and figures used to make the 2012 version of Frankenweenie are much larger than Burton’s previous stop-motion film sets. The reason for this is that Sparky, who is the main character in the film, needed to be “dog-sized” compared to his human counterparts. Yet there was only so small Sparky could be, since the animators needed the ability to fine-tune his movements using an internal mechanical skeleton. So with Sparky needing to be a reasonable size to manipulate, all other characters in the film – especially the humans – had to be correspondingly larger sized.

We visit the New Holland Pet Cemetery several times in the 2012 film. In addition to Sparky, the pet cemetery displays final resting places of many of the production cast’s past pets – honoring those pets with their own graves in the cemetery. Aside from these real life lost friends, there is one grave that belongs to a familiar face for Tim Burton fans – Jack Skellington’s dog Zero from The Nightmare Before Christmas!